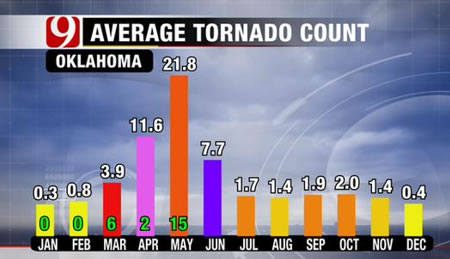 Autumn in Oklahoma may bring to mind blue skies, comfortable afternoons and crisp nights, but many areas of Oklahoma will experience severe weather and tornados during this time. In fact, October is the busiest month for tornados in Oklahoma outside of high storm season (March – June).

We recently wrote about Oklahoma tornado averages by month, and it is clear that activity peaks in the spring and increases slightly again in the autumn. This secondary peak happens when the jet stream shifts farther south after retreating northward during the summer months. An active jet stream pattern provides the deep wind necessary for supercells and large outbreaks of severe storms.

The strongest tornado that took place in the fall happened on October 5, 1970. An F4 tornado struck Shawnee and Prague then dissipated in Okfuskee County. That particular storm killed four people and injured 84.

An unusually wide F2 tornado injured four people in Haydenville on October 4th, 1998. That system spawned six other tornados in northeast Oklahoma and a hailstorm that damaged hundreds of roofs and windows in Okmulgee.

Tulsa County in particular has experienced three weak tornados in the month of October (1983, 1991 & 1998). The 1983 tornado occurred on the flank of a microburst that damaged South Intermediate High School in Broken Arrow.

So far, 2015 has seen above average tornado outbreaks during high storm season. We will soon find out if this trend continues as we move into October.