The Do's and Don'ts Once Inside Your Storm Shelter 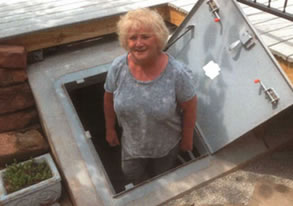 If you live in an area that has frequent tornados (like Oklahoma), you will definitely want to get a storm shelter. Once you have your tornado shelter, you will need to know how to use the shelter as effectively as possible in order to be safe from storms.

First things first. Make sure that your family knows exactly what to once a tornado hits. Every single member of your family needs to know where the shelter is, where to meet, and what to grab. Don't just assume that your kids will know what to do!

The key is to make a plan. Practice your family preparedness plan a few times with your family. Act like there is a tornado and have everyone follow the plan. This will not only teach your kids what to do, but it will also point out the obvious flaws with your plans that can be fixed later.

We have previously written a detailed article about what to keep in your storm shelter. As a recap, you should keep basic disaster supplies in your shelter. These things include: a weather radio, flash lights, water, food, blankets, and any other items that are unique to your family.

You should also try to have some form of entertainment. Sometimes, storms can last a number of hours. Children in a small space with nothing to do can become frustrated and fussy. Simple things like cards, video games, board games, coloring books, or a DVD player will provide some entertainment.

Once everyone is safe in the storm shelter, make sure the door is securely fastened and get ready to hunker down! If you have an outdoor concrete shelter, make sure to allow plenty of time to get to the shelter before the tornado arrives. If you wait until the storm is upon you, you will be exposed to wind, hail, rain, lightning and maybe even flying debris as you try to get to your shelter.

Once the tornado is there, be prepared. It will be extremely noisy (some say it sounds like a freight train). The pressure may surprise you and your children. Your ears will definitely pop several times within seconds. Once the tornado passes there will be a seemingly dead calm. Once you are sure the storm has passed, it is okay to emerge from the shelter. After the tornado is over, you might seem overwhelmed with the next steps to take, especially if your home is damaged. Don’t worry! Check out our detailed article series, How to Recover from Disaster.

What Causes a Tornado to Start

With wind speeds that can reach more than 300 mph, tornados are one of the most destructive natural disasters on the planet. Although scientists don't entirely understand how they are formed, they do have a good idea about the conditions that cause tornados to develop in the first place.

Tornados have touched down on all continents except Antarctica, but certain locations on Earth are more likely to experience tornados than others. Most tornados occur in Tornado Alley— the tornado-prone region of the United States, that spans from Texas to Kansas as well as the states in the Great Plains region.

This area often has the three things necessary for tornados to form: 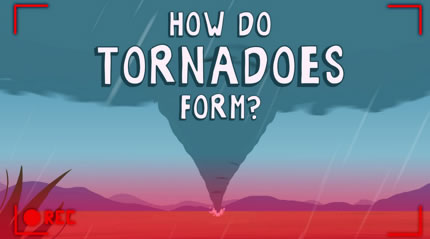 In areas where tornados can occur, warm, moist, low-elevation wind collides with cool, dry, higher-elevation wind. This unstable interaction causes the warm air front to quickly rise and cool air front to fall, which leads to the formation of a supercell, a type of thunderstorm with a long-lived, swirling updraft of air.

However, not all supercells result in tornados.

Scientists believe that if the two opposing winds move at different speeds, the air in between them will rotate on a horizontal axis. If one end of the horizontal air column gets caught in the supercell's updraft, it will tilt vertically, forming a funnel cloud.

The continuous upward energy of the supercell elongates the funnel cloud, and causes its spin to tighten and speed up (similar to the way ice skaters spin faster when their arms are pulled close to their bodies).

Rain and hail from the thunderstorm push down on the tail of the funnel. When the bottom of the funnel cloud finally touches the ground, it becomes a tornado.
Don’t wait any longer and keep your family safe by ordering a storm shelter today!

What to Look for When a Tornado is Approaching 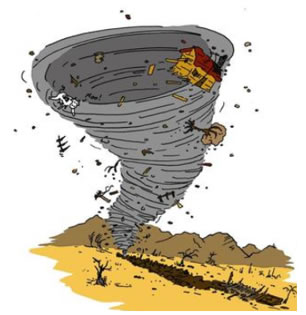 We recently learned how tornados are formed, but all that knowledge is useless unless you know what to look for. So let’s discuss how to spot a tornado.

Sign #2 - Rotating wall clouds or funnel clouds originate from the lowering down of the meso-cyclone, almost a certain sign that a tornado is developing or approaching.

Sign #3 - Green skies. In the middle of a thunderstorm, if you see that the dark sky is turning green, it could be a sign of tornado formation. Green-tinted storm clouds are the result of dense moisture in the atmosphere reflecting green light.

Sign #5 - Flying debris in the air. A tornado may pick up debris on its way to your neighborhood.

Sign #6 – There is a calm period after heavy rain and / or hail.

There are numerous signs, and you may not see all of them, but the best bet is that you will encounter a few of them before coming in contact with a tornado. There are also several safety rules that you should follow. Below are the do’s, don’ts and the never’s of tornado safety survival.

The Do’s of Tornado Safety Survival:

The Don'ts of Tornado Safety Survival:

The Never’s of Tornado Safety Survival:

Every year from early spring to mid-summer tornados become a reality in many states. Tornados can occur anywhere and at any time if the conditions are right. But during tornado season, the chances of these storms occurring in Tornado Alley and the Great Plains are the greatest.

On average, 60 people will lose their lives each year. So what can you do to make sure you and your family aren't listed among the casualties the next time a tornado touches down in your neighborhood?

You need to invest time and money into a disaster supplies kit and create a family disaster plan.

What is a tornado watch, and how is it different from a warning?

A tornado watch defines an area where tornados and other kinds of severe weather are possible in the next few hours. It does not mean tornados will form - just that you need to be alert and prepared to find safe shelter if they do. Find out what to do when a tornado watch is issued.

A tornado warning, issued by the local National Weather Service office, means that a tornado has been spotted, or that Doppler radar indicates a thunderstorm acting in a way which can spawn a tornado. Find out what to do when a tornado warning is issued.

Make sure your weather radio has fresh batteries, and that it is on standby whenever thunderstorms are likely. A good weather radio will activate itself whenever a tornado watch or warning is issued, (and will do the same for any other weather threat or civil emergency). If there are tornados forming in your area, your best defense is having the time to get to safe shelter, and a weather radio will give you this.

Make sure you know where safe shelter is, and make sure you know how to get there in a hurry. Finding shelter will be made easier if you are prepared. Most workplaces and schools in a tornado-prone area will have an action plan. If you are at home you should move to a safe location, either one you have prepared in your home, or at a public shelter.

The safety of a home storm shelter will depend on the construction of your house, and whether you have modified it to provide a safe room.

If you are in your vehicle when a tornado strikes you have two choices. If traffic and roads allow, you can drive away from it - if possible take a few moments to assess the risks.

If you can see the tornado, line it up with a fixed point such as a building or a tree. If it moves to the left or right the tornado is not heading toward you; but to be on the safe side, drive away in the opposite direction.

If it doesn't appear to move, but does appear to be growing larger, it is probably coming your way. If you can't drive away from it or find a secure shelter, abandon your car, and lie flat on the lowest ground you can find - a roadside ditch would be a good option. Cars can be death traps, and sheltering under bridges or overpasses is very risky.

So as you can see, it is best to have a plan, and keep your weather radio handy and charged up. If you follow these guidelines, you should stay safe during tornado season.

Why It's Important to Have Tornado Insurance

By now, we have seen the devastating effect of tornados. There were 897 confirmed tornados in 2014 that occurred in the U.S. alone. Although people living in Tornado Alley are the most vulnerable, they can and will strike anytime at any place. This is precisely why having tornado insurance is a must for homeowners.

The time to protect your family, home, and personal property is not AFTER disaster strikes – it should be BEFORE the disaster. First things first. You should never assume that your homeowner's policy automatically covers tornado damage. Many insurance companies exclude certain coverages in high risk areas. While tornado damage is generally covered under "wind damage" in your policy, this may not always be the case. Even if you are covered, it may not be to the degree that you need. In order to find out, you must contact your agent.

Give them a call and ask if you are covered. If not, inquire as to what types of coverages they offer. Next, take detailed photos of the inside and outside of your home, preferably from different angles. Make sure to include ceilings, floors, windows, walls, roof, sheds and garages. Doing so will help demonstrate their condition before any damage has occurred. Also, take pictures of all your important valuables. Keep a list and save all your receipts!

Planning ahead and doing your due diligence is the key to staying safe during tornado season. Don't delay and contact your insurance agent today!

Tornado Averages by Region of the United States

Tornado season does not hit the U.S. all at once – it happens at all different times of year in many places. The map above shows the differences in seasons and which parts of the country get the most tornado action. Below, we broke down each part of the United States by region and give information on the average number of tornados for each state. 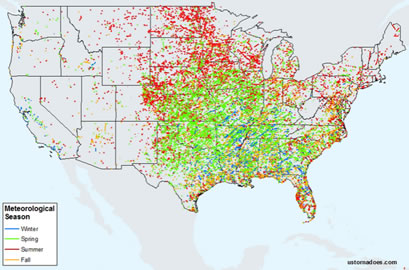