Why You Should Always Avoid Underpasses During Tornadoes 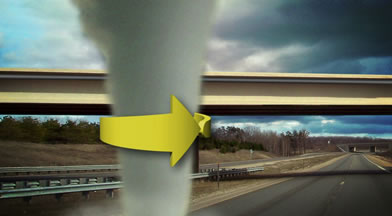 Many people mistakenly think that a highway overpass provides a safe haven from a tornado. The reality is that an overpass may be one of the worst places to seek shelter from a tornado. Using an overpass for your shelter can put you at a much greater risk of being killed or seriously injured by a tornado.

Tornado wind speeds can sometimes exceed 200 mph. These destructive winds produce airborne debris that are blown into and channeled under the overpass where people might be seeking shelter. Varying debris, including dirt, sand and rocks that are moving at incredible speeds can easily penetrate clothing and skin, causing serious injuries or even death.

Let’s take a look at the facts:

Where You Should Shelter Instead

If you are on the road, try to drive to the closest sturdy shelter. If that is not an option, pull over and park. You now have two choices:

Your choice should be driven by your specific circumstances.

The bottom line is: OVERPASSES DO NOT MAKE SAFE SHELTER AREAS! Check out the video below to see what happens when you shelter under an overpass:


Also, take a look at our related articles: